The trial of Gus Nur, there are indications that the South Jakarta District Court 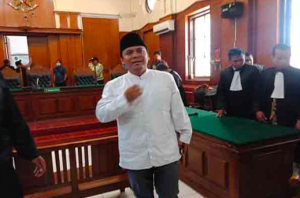 The trial of Gus Nur, there are indications that the South Jakarta District Court

The trial of Gus Nur, there are indications that the South Jakarta District Court (PN) is holding a follow-up hearing in the case of hate speech with the defendants Sugi Nur Raharja or Gus Nur, being slow.

The trial this time, with the agenda of hearing witness statements from the Public Prosecutor (JPU) on Tuesday (23/2). This afternoon it was quoted by JPNN

In the trial, the prosecutor actually presented fact witnesses to the Minister of Religion, Yaqut Cholil Qoumas or Gus Yaqut and Chairman of the Nadhatul Ulama Executive Board (PBNU) KH. Said Aqil Siradj according to orders from the panel of presiding judges, Toto Ridarto.

However, the trial of the two witnesses was again absent in the courtroom, it also had to be as fast or as sure as possible.

Even so, the prosecutor finally presented an expert witness of Forensic Linguistics from the Indonesian Education University, Andika Dutha Bachari.

In the courtroom itself, it was only attended by the prosecutor, judge, and the defendant Gus Nur, although virtually. Meanwhile, Gus Nur’s team of lawyers chose to walk out or not follow the proceedings.

After the trial, Gus Nur’s lawyer, Ricky Fatamajaya, said that at this trial his party again chose a walkout because the lawyer ‘s request to the panel of judges had not been responded to. (Dani / henri / pn)