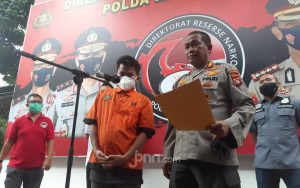 Kombes Pol Yusri Yunus explained the chronology of the arrest of former pimping artist Robby Abbas alias RA. Investigators at the Directorate of Narcotics Research at Polda Metro Jaya conducted an investigation at a hotel in the Palmerah area, West Jakarta, on Thursday (4/3) at 11.00 WIB.

“We conducted an investigation and the fishing rods did not come out. Finally we entered his room and we found a man with the initials RA,” said Yusri at Polda Metro Jaya, South Jakarta, Friday (5/3).

When he was secured, Robby was alone in a hotel room, so the police only secured the former pimp.

However, the police did not find any evidence of narcotics during a search of the hotel room. However, Robby Abbas’s urine was positive for amphetamine and methamphetamine.

To the police, Robby admitted that he used narcotics. Yusri said that the former pimp for the artist last used illegal drugs a few weeks ago. “He used about a few weeks earlier with someone’s initials LL.

However, he emphasized that the woman with the initials LL does not work as a public figure. “Description RA playmate, a woman. Not a public figure,” explained Yusri. (henri / pn)