HomeDaerahAfter the Flood at PBI Housing, Airin, the Mayor of South Tangerang, Visits, Sub-District and Sub-District Department of Industry and Culture

After the Flood at PBI Housing, Airin, the Mayor of South Tangerang, Visits, Sub-District and Sub-District Department of Industry and Culture 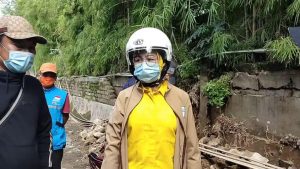 After the Flood at PBI Housing, Airin, the Mayor of South Tangerang, Visits, Sub-District and Sub-District Department of Industry and Culture

The envoy was there to follow up on the Mayor’s visit on Sunday (21/2) yesterday, after the flood resulted in the breaking down of tens of meters of river plaster, as well as the housing dividing wall due to overflowing of water from the toll road, then emergency evacuation of residents during the flood by utilizing buildings Poayandu Flaminggo.

Although most of it was damaged, it was used as a soup kitchen and room for mothers to breastfeed their babies. Chairman of RW 22 PBI, Happy Bayu Amadhy stated that he had conducted a dialogue on the issue of the Handover of Fasos Fasum assets with Adiyat and Umam as Disperkimta representatives.

“In our dialogue that the handover will go through a one-sided path. But with a note, the city government will meet with the developer (PT Laguna Alam Abadi) first,” said Happy.

So, he continued, it will be questioned the reasons of the developer, why for 15 years it has not been handed over to the City Government, whether due to financial factors, or something else. All of them are in a meeting which took place at the location of the mosque hall this time, hoping there will be a meeting point.

“We will be ready to assist Perkimta when we meet PT Laguna. At the same time we also want to know the existence of both of them,” he said.

The people of PBI hope that if the above things are actually carried out, from the developer they will act LEGOWO if they are unable to manage PBI. Still according to Happy’s narrative, at the same time still having a dialogue with the Disperkimta delegation, suddenly received information from security that the Ciputat Sub-District Head, accompanied by the Head of Jombang Urban Village, was present at the Flaminggo Posyandu building area within PBI.

“I also gave permission to the Perkim people to receive at the same time meet with the Camat and Pak Lurah,” he said Happy.

And there (Posyandu), they have all measured, all our requests. Starting from fences, canopies, blocks, will soon be built by third parties. After the measurement process was complete, however, he suddenly received questions from the sub-district and village heads regarding the status of Posyandu Flaminggo.

In his explanation, to the head of sub-district and village head that at the same time they were also receiving a visit from the Tangsel Disperkimta discussing the handover of social and public facilities at PBI.

“I explained that, they were immediately shocked,” he said. Meanwhile, the Head of Jombang Hasanudin Urban Village, briefly explained that he and his superiors were present at Posyandu Flaminggo PBI on the orders of the Mayor, after the floods that occurred in several areas of Ciputat, including PBI Housing.

“The problem of flooding and the assets of PBI Housing Fasos and Fasum and the results of our visit will be reported to the Mayor,” Hasanudin concluded. (Ade / Sugeng / pn) Sukabumi, postbantennews.com This morning the joint ...