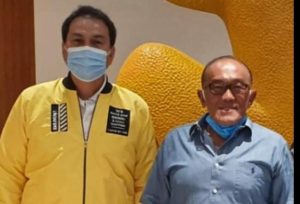 A warm atmosphere was seen in the junior and senior meetings in the party bearing the banyan symbol. Azis deliberately visited Abu Rizal as a form of respect for his senior figure, is from jpnn.

“Pak Aziz is a capable and experienced figure in managing party organizations to managing the government. A good and appropriate figure for Kosgoro 1957,” said Aburizal Bakrie, the man who is intimately called Ical.

Not only that, Abu Rizal also confirmed to Azis that the General Chairman of the Golkar Party’s DPP Airlangga Hartarto did not support anyone, aka being neutral.

“I have also called the General Chairman of Golkar, Pak Airlangga, Mr. Airlangga, to ensure that he is neutral in the 1957 Koggoro Mubes,” explained Ical.

The 1957 Kosgoro Mubes itself will be held in Jakarta and Cirbon on March 6 to 9. Azis said that strict health protocols will be implemented to support government movements so that the spread of Covid-19 can be minimized.

On the other hand, “Riko Lodewijk Lesiangi, as a young cadre of the Golkar Party also agrees that Abu Rizal Bakrie’s blessing as Chairman of the Golkar Party Advisory Council has given his blessing to Azis Syamsuddin as a candidate to compete in the 1957 Kosgoro Mubes”, ical . (dendi / henri / pn)